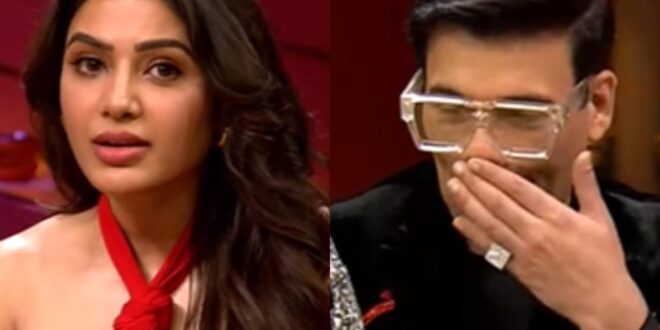 From a couple of weeks, there are many rumours that star heroine Samantha Ruth Prabhu went to the USA to get treated for a skin infection. While the rumours about her health part couldn’t be confirmed, it’s coming out that the actress has indeed landed in the USA and will be returning any day soon. And here comes the latest snippet.

Apparently, Samantha’s total absence from social media where she lives most of the time of her life has resulted in the mushrooming of many rumours. However, on the latest episode of Koffee with Karan, where she got selected by a jury as the “Best Actress” in the Season 7 of KoK, a truth got spilled.

After the jury members pronounced that they should give the ‘best actress’ award to Samantha Ruth Prabhu as she was more open and honest on the show, Karan Johar tried to reach her number. Though Samantha didn’t pick up the call, during that process KJo identified that she was in a foreign country as the ring style says it so. In the end, the computer message that the caller is not lifting has come out in Marathi/Hindi, which means KJo tried her Bollywood mobile number.

This is now giving clarity that Samantha has indeed gone abroad as the episode was filmed only last week. But then, one wonders why she might have gone there.