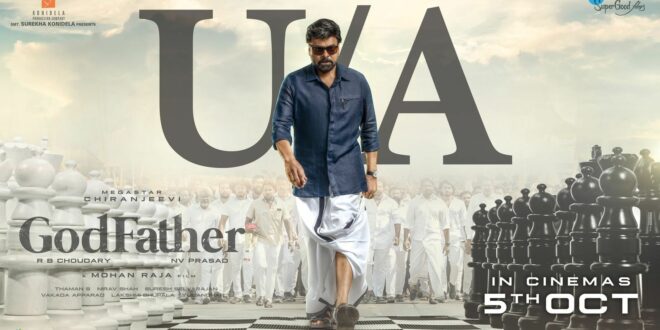 In nearly two weeks, megastar Chiranjeevi’s much awaited movie GodFather will be hitting the screens. The makers as not to face last minute tensions are completing all the pending works at rapid pace. Meanwhile, the film has completed its censor scrutiny and it received U/A certificate from the censor officials. The makers released this powerful poster to make this announcement.

On a huge chess board with black and white coins on the opposite sides, Chiranjeevi in panchekattu can be seen walking seriously in middle of the board with his people following him. This give huge elevations to Chiranjeevi’s character who will be seen in a mass leader.

GodFather is an action thriller with political elements and it marks the Tollywood debut of Bollywood megastar Chiranjeevi. The two big stars were seen shaking their leg together in the lyrical video of the dance number Thaar Maar scored by S Thaman.

Directed by Mohan Raja, GodFather will be releasing worldwide on October 5th.